KANGMAS: Karya Ilmiah Pengabdian Masyarakat is a scientific periodical journals that managed by peer-review, in which other scientists (peer-review) evaluate the article’s value and credibility before published. This journal is dedicated to publish scientific articles in the study of Social Service from different aspects and perspectives as well as the themes that have been determined. This journal is available in online with ISSN: 2722-2004, and published three a year, in March, July, and November. KANGMAS: Karya Ilmiah Pengabdian Masyarakat aims to become one of the forums for ideas and results of researches dissemination in the field of Social Service. In addition, it also can be a major reference in the same field. KANGMAS: Karya Ilmiah Pengabdian Masyarakat committed to keep maintaining the high ethical standard in scientific publication include the peer-review, author, journal editor, and publisher.

The publication of an article in KANGMAS: Karya Ilmiah Pengabdian Masyarakat is an essential building block in the development of a coherent and respected network of knowledge. It is a direct reflection of the quality of the work of the authors and the institutions that support them. Peer-reviewed articles support and embody the scientific methods. It is therefore important to agree upon standards of expected ethical behavior for all parties involved in the act of publishing: the author, the editor, the reviewer, the publisher, and the society. As the publisher of KANGMAS: Karya Ilmiah Pengabdian Masyarakat, Neoletura which is under maintenace by PT Naraya Elaborium Optima - Indonesia, takes its duties of guardianship over all stages of publishing seriously and it recognizes its ethical and other responsibilities. Neolectura - Indonesia committed to ensuring that advertising, reprint or other commercial revenue has no impact or influence on editorial decisions.

The editors of KANGMAS: Karya Ilmiah Pengabdian Masyarakat is responsible for deciding which articles submitted to the journal should be published. The validation of the work in question and its importance to researchers and readers must always drive such decisions. The editors may be guided by the policies of the journal's editorial board and constrained by such legal requirements as shall then be in force regarding libel, copyright infringement, and plagiarism. The editors may confer with other editors or reviewers in making their decisions.

It is basically author’s duty to only submit a manuscript that is free from plagiarism and academically malpractices. The editor, however, double checks each article before its publication. The first step is to check plagiarism against offline database developed by Neolectura - Indonesia and, secondly, against as much as possible online databases. We use a plagiarism checker turnitin.

An editor at any time evaluates manuscripts for their intellectual content without regard to race, gender, sexual orientation, religious belief, ethnic origin, citizenship, or political philosophy of the authors.

The editors and any editorial staff must not disclose any information about a submitted manuscript to anyone other than the corresponding author, reviewers, potential reviewers, other editorial advisers, and the publisher, as appropriate.

Disclosure and Conflicts of Interest

Unpublished materials disclosed in a submitted manuscript must not be used in editors' own research without the express written consent of the author. 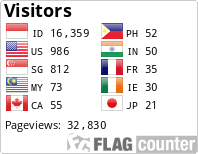